Bank of Jamaica Quarterly Monetary Report:
For the period (July to August 2018)

The Bank of Jamaica (BOJ) held its Quarterly Monetary Policy Press Conference today, where the Governor, Mr. Brian Wynter, commented on the Bank of Jamaica’s decision to hold the policy interest rate unchanged at 2.00%.

According to the Governor, “this policy decision reflects the Bank’s assessment that inflation will rise close to the upper band of the 4.0% to 6.0% over the three quarters to June 2019 and will trend thereafter to middle the target range.” He highlighted that the Bank views current monetary conditions as appropriate to support inflation returning to the centre of the target over the medium term hence supporting the decision to maintain the policy rate at 2%. In addition, the Banks sees “an encouraging pick-up in credit extended by deposit-taking institutions to the private sector, and thus hopes that maintaining the policy rate will continue to encourage increased economic activity and job creations financed by strong growth in credit to the private sector.”

Bank of Jamaica’s next monetary policy announcement is scheduled for Thursday, 20 December 2018. 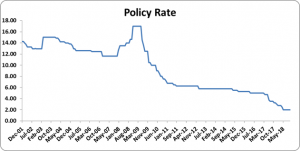 Inflation Performance relative to the target and revised outlook

Over the next four quarters, Mr. Wynter indicated “inflation is projected to fall to 4.0% at December 2018, accelerate to about 4.7% at March 2019 and then rise further towards the upper limit of the target by June 2019. Inflation is then projected to fall close the lower limit of the target in the September and December 2019 quarters and then gradually trend towards 5.0% thereafter.” Notably, BOJ’s forecast inflation to converge to 5.0% for the medium-term, supported by continued improvements in domestic demand as GDP growth strengthens and the labour market improves.

The Banks assets inflation to be generally balanced but however outlined the downside and upside risk that would cause inflation to deviate from projections.

The main downside risk that would result in inflation being lower than forecasted includes:

The main upside risk that would result in inflation being higher than forecasted are as follows:

Nonetheless, Mr. Wynter highlighted the prospects for the Jamaican economy are positive as the Bank projects continued recovery in economic activity. This forecasted growth reflects the Bank’s assessment of “an improvement in net external demand, buoyed by increased production in mining and quarrying and expansion in construction and tourism activities.” In addition, unemployment is at an all-time low (8.4% as at July 2018) and BOJ sees further improvements to labour market conditions and employment over the next two years. However, though GDP is improving, they also project this will somewhat trend below potential output.

The Bank views that the market is more than adequately supplied with US dollars and thus has recently announced its intention to buy US$10.0 million on December 5, 2018. He highlighted, “Purchases by the Bank are used to meet the foreign exchange requirements of the government and public sector bodies, such as for debt service and to build reserves. The Bank also purchased in circumstances where it is necessary in order to maintain orderly conditions in the foreign exchange market.”

In concluding, Mr. Wynter ended on the note that, “Jamaica’s macroeconomic indicators are positive. Inflation is low and on target and international reserves are at healthy level. The current account of the balance of payments, while projected to widen, should remain at sustainable levels. Market interest rates are at record lows and fiscal performance is strong.”