The Bank of Jamaica (BOJ) held its Quarterly Monetary Policy Press Conference today, where the Governor, Mr. Brian Wynter, commented on the Bank’s decision to lower the policy interest rate by 25 basis points to 1.50%.

According to the Governor, “this policy decision reflects the Bank’s assessment that inflation will again fall below the target at various times over the next eight quarter in the context of low core inflation and large seasonal increases and reductions in agricultural prices. Inflation will then slowly approach the midpoint of the target over the medium term.” However, inflation can return to the target sooner if the pace at which private sector credit is expanding is increased. Signs are emerging that the private sector credit is expanding at a slower pace instead of at a faster pace as lending rates at commercial banks continue to fall. “For example, credit extended by deposit-taking institutions to businesses and households grew by 13.2 percent over the 12 months to December 2018, compared to 16.2 percent over the 12 months to September 2018,” as stated by the Bank.

As a result of increasing the pace of private sector credit expansion, increased economic activity will be stimulated by businesses and households across Jamaica. With there being more economic activity, this will bring with it a bit more inflation, which will support inflation returning to the centre of the target more quickly. As indicated by the Governor, “the decision to lower the policy rate to 1.50% is therefore aimed squarely at stimulating this pick-up in the pace of expansion in private sector and is not aimed at influencing the exchange rate.”

Bank of Jamaica’s next monetary policy decision announcement is scheduled for Wednesday, 27 March 2019. 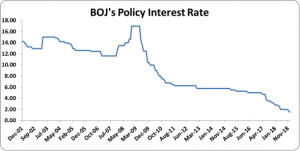 Notably, Mr. Wynter indicated that, “the inflation rate year to date is 2.3% , down from  2.4% at December 2018 and 4.8% at January 2018.” This means that inflation fell below the target for the second month in a row. He further mentioned that, “inflation continues to be influenced by the lagged impact of the fall in international oil prices last year and unseasonably high supplies of agricultural items, which, starting in December 2018, caused a sharp fall in agricultural food prices.”

Looking ahead, Mr. Wynter indicated “inflation is projected to increase to 5.0% in the June 2019 quarter.” This rise will come from rising food prices as agricultural supplies fall back to normal levels, as well as from increases in prices for processed foods, energy and transport services driven by the expected uptick in oil prices. It should be noted that the risk still remains that inflation could fall below the target again over the first part of the fiscal year 2019/20, due to the large seasonal increases and reductions that have been seen in agricultural supplies and prices.”

For the medium-term forecast, inflation is expected to rise slowly to the midpoint of the target which is lower than what was discussed in November 2018 when the Bank anticipated a faster rise towards the midpoint of the target. The revised outlook reflects a more moderate pace of expansion in domestic demand due to a lower projected growth rate in the global economy and a smaller increase in crude oil prices.

Risks to the Forecast

The Bank assessed the risks to the inflation forecast to be generally balanced but however outlined the downside and upside risk that would cause inflation to deviate from projections.

The main downside risk that would result in inflation being lower than forecasted includes:

The main upside risk that would result in inflation being higher than forecasted are as follows:

Nonetheless, Mr. Wynter indicated the prospects for the Jamaican economy are positive as the Bank projects continued recovery in economic activity although the economy is nevertheless estimated to be operating below its potential. “Real GDP growth is expected to have accelerated in the range of 1.5 percent to 2.5 percent in the December 2018 quarter, above the 1.2 percent recorded in the December 2017 quarter,” as was noted by the Governor. This forecasted growth predominantly reflects the Bank’s assessment of “improvements in external demand, investment and, to a lesser extent, private consumption.” In the absence of a policy response, the Bank of Jamaica projects that GDP growth would remain close to current rates over the next two years and the economy would continue to operate below its potential with muted inflationary pressures. In addition, unemployment rate fell to 8.7 percent in October 2018 from 10.4 percent a year earlier and BOJ sees further improvements to labour market conditions and employment over the next two years.

In concluding, Mr. Wynter ended on the note that, “Jamaica’s macroeconomic indicators continue to reflect entrenched stability. Foreign reserves are above the level deemed adequate and the current account deficit remains low and sustainable. Market interest rates are at record lows and fiscal performance continues to be strong.”