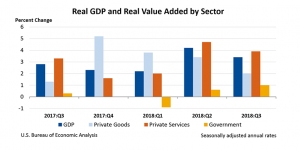 For the wholesale trade industry group, a 7.4 percent increase was realized in the third quarter, after increasing 2.6 percent in the second quarter. In addition, Information services increased 7.6 percent, after increasing 13.4 percent in the previous quarter. Specifically, increases were realized in publishing industries; data processing, internet publishing, and other information services; and broadcasting and telecommunications. Finance and insurance increased 5.5 percent, after decreasing 2.0 percent. The third quarter growth primarily reflected an increase in Federal Reserve banks, credit intermediation, and related activities.

There was a 4.2 percent increase in Professional, scientific, and technical services, after increasing 9.3 percent, and was the second leading contributor to the slowdown. The deceleration was primarily attributed to a slowdown in miscellaneous professional, scientific, and technical services, which includes industries like advertising, research and development, and engineering services. Utilities which includes electric power generation, transmission, and distribution; natural gas distribution; and water, sewage, and other systems, decreased 4.8 percent, after increasing 19.1 percent. 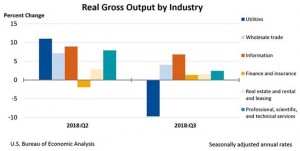