Fees & Commissions Income rose significantly by 79% to close at $1.36 billion (2020: $760.41 million). Management noted, “the rise in fee income during the period is attributable to an increase in fees generated by investment banking and asset management business lines relative to the corresponding period in FY20. During Q2 FY21, Barita completed several capital markets deals including the landmark Additional Public Offering (“APO”) for Derrimon Trading Company (“DTL”), which was the largest fundraise in the history of the Junior Market of Jamaica Stock Exchange attracting more than $7 billion in subscriptions.”

Foreign exchange trading and translation gain amounted to $1.14 billion compared to a gain of $106.64 million recorded in the previous year. Management indicated, “we continue to actively manage the Group’s balance sheet foreign exchange exposure in our effort to safeguard shareholder’s equity against trading operations through a combination of greater customer engagement and increased transactional activity. The local currency (J$) local currency showed a depreciatory tend for Q2 FY21, closing March 2021 against the United States Dollar (“US$) at J$146.58: US$100, a devaluation of $3.83 or 2.7% versus the December 2020 level.

Administrative Expenses for the period amounted to $779.40 million, increasing 50% from $518.91 million in 2020. Staff costs for the six months rose 72% from $345.33 million booked in 2020 to $592.69 million in 2021. ‘Impairment/ Expected Credit rose 7% to $101.09 million compared to $94.18 million reported in 2020. Management noted, “the increase in ECL is a function of the significant balance sheet expansion, in particular the increased credit portfolio. The rise in expenses during the quarter reflects the Group’s continued investments in the critical pillars of its transformational growth strategy to include acquisition and retention of human capital management, customer acquisition initiatives, and development of key infrastructure to enhance customer experience.” 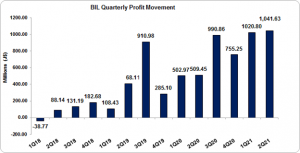