Revenues from the company’s segments were as follows:

Direct expenses recorded an increase to close the period under review at $8.69 billion when compared to $7.83 billion for the same period in 2020. As such, gross profit for the period fell 12% to $2.02 billion (2020: $2.30 billion). Management noted “this was a truly historic quarter for the Group’s operations as against the backdrop of a full twelve months of lagging COVID-19 economic impact, as well as the introduction of new Lottery entrants to the market, we were able to protect and grow our customer base and record the highest revenues in the company’s history.”

Finance income amounted to $11.63 million relative to the finance cost of $54.04 million reported in the corresponding period in 2020. Profit before taxation amounted to $764.35 million, down from $1.01 billion recorded in the previous comparable period.

In addition, SVL stated that, “this expected reduction in profitability for the three-month period, is a result of several external factors including Government imposed restrictions to contain the spread of COVID-19, higher lottery liabilities during the quarter as compared to Q1 2020, and the introduction of competition.” Furterhmore “ the Group continues to focus on expanding channel strategies and terminal expansion, which have been received by the marketplace.” 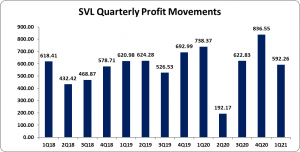