Notably, BIL reported no Impairment of available-for-sale investment relative to the $100.16 million reported in 2017.

BIL noted, “we anticipate that the Jamaican economy will continue to be viable for investors in a landscape underpinned by local dollar volatility and interest rates at historic lows. As such we position ourselves to exploit as much of the opportunities to be derived as possible, while working tirelessly to satisfy the group we serve.” 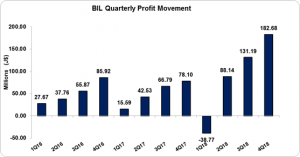