For the six months ended March 31, 2020, Barita Investments Limited (BIL) net interest income increased by 111% amounting to $540.08 million relative to $256.42 million for the comparable six months in 2019. “The rise in Net Interest income was driven for the first half of the year by our strategy of continued measured growth in our fixed income and credit portfolios as we rebalance our funding structure in the context of our capital raising efforts in FY 2019.” as per Barita. Net interest income for the second quarter closed at $331.46 million (2019: $132.81 million).

Dividend Income fell 78% to total $4.33 million compared to the $19.82 million earned for the six months ended March 31, 2019. Gains on investment activities rose by 40% to $851.12 million (2019: $609.87 million). BIL noted, “this business segment relates to the management of our cambio and proprietary trading portfolio, which closed the period registering a 103% or $486 million increase to $957.8 million when compared with $471.8 million reported for the same period in the prior financial year. This was largely driven by realised securities trading gains of $547.2 million, and foreign exchange trading income of $111.5 million. unrealized securities trading income totalled $303.9 million for 6M FY 2020.”

Fees & Commissions Income rose significantly by 84% to close at $760.41 million (2019: $414 million). Management noted, “the rise in fee income during the period was primarily driven by the Group’s continued growth in assets under management coupled with income from our Investment Bank business line.”

Foreign exchange trading and translation gain amounted to $106.64 million compared to a loss of $138.12 million recorded in the previous year. Management indicated, “we continue to focus on dynamic management of the Group’s foreign exchange exposure. Our local currency depreciated by $2.82 or 2.13% against the United States (‘US’) dollar to close Q2 at $135.39 as per the Bank of Jamaica (“BOJ”) Weighted Average Selling Rate. The Group’s foreign exchange translation loss was $4.9 million when compared to the losses of $196.6 million recorded the corresponding period of last year.”

Administrative Expenses for the period amounted to $518.91 million, increasing 141% from $215.18 million in 2019. The movement was due to “increases in areas such as marketing, business development, and facilities improvements,” according to BIL. Staff costs for the six months rose 53% from $226.10 million booked in 2019 to $345.33 million in 2020. ‘Impairment/ Expected Credit Loss’ surged 322% to $94.18 million compared to $22.34 million reported in 2019. Management noted, “the rise principally reflects increases in staff costs, administrative expenses and expected credit losses (“ECL”) associated with our investment portfolio.” BIL noted the movement in staff costs was attributed to, “the recruiting efforts we have seen as necessary to continue our transformational growth.” 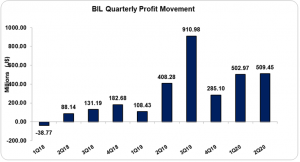