For the period of April 2019 to March 2020, the GOJ reported Total Revenues & Grants of $649.76 billion, $4.50 billion more than the Government’s projection. Furthermore, year over year, this represents an increase of approximately 3.3% relative to the $628.99 billion recorded for the corresponding period in 2019. ‘Tax Revenue’, ‘Non-Tax Revenue’ and ‘Capital Revenues’ all outperformed projections during the review period. ‘Tax Revenue’ amounted to $579.40 billion; $1.86 billion more than budgeted. Likewise, ‘Non-Tax Revenue’ closed at $64.51 billion, $2.76 billion over the expected amount. ‘Capital Revenue’ of $1.20 billion was reported; $73.90 million more than budgeted. Lastly, ‘Grants’ totaled $4.66 billion, $61.3 million or 1.3% less than budgeted. Notably, no provisional amount was booked for ‘Bauxite Levy’ for the review period.

As a result of the decrease in Expenditures for the period April 2019 to March 2020, the ‘Fiscal Surplus’ was $19.40 billion, relative to a projected surplus of $2.65 billion. Additionally, the primary balance for the period amounted to $150.89 billion, 6.4% more than budgeted. 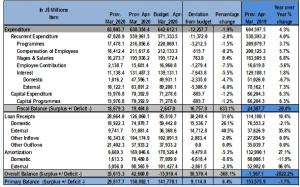 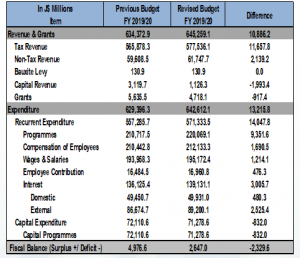 “The Third Supplementary Estimates FY 2019/2020 was tabled in Parliament on March 24, 2020 and represents a revised budgetary provision for the Government’s coronavirus (COVID-19) response,” as stated by the Jamaica Information Service (JIS).

According to JIS, “Minister of Finance and the Public Service, Dr. the Hon. Nigel Clarke, noted that the revised Estimates of Expenditure incorporate the reallocation of unutilised Central Government resources, the majority of which will go towards financing COVID-related activities. The revision does not change the total amount of the current year Budget, which remains at $859 billion. However, it reallocates $832 million from capital spending to recurrent expenditure.”

Furthermore, “Dr. Clarke highlighted that, the reallocation of resources is possible due to the slower than programmed execution of elements of the 2019/20 Budget, and a lot of that as well as expenses that were programmed for March that have been interrupted by these activities. As a result of this, unutilised balances were identified across ministries, departments and agencies (MDAs) representing amounts that will not be utilised under the existing allocations,” according to the JIS.