Other income, for the period totalled $1.78 million a significant decline when compared to the $2.41 million recorded for the same period last year.

Net Profit for the period totalled $56 million, a 19% decrease compared to $69.50 million the prior financial year. Net profit for the quarter amounted to $17.53 million compared to $32.10 million booked for the second quarter of 2016. Management noted, “the main reason for the negative variance is that the revaluation of the Jamaican currency which, taking into account our approach of holding surplus funds in US currency, contributed to the negative variance when comparing the two periods.” “Even with its share of exchange losses, the Lumber Depot Division is showing an excellent performance for both the quarter and the half year, with the results being close to its results last year in the same periods.”

Additionally, BPOW noted, “with respect to the acquisition of soap manufacturing equipment from a subsidiary of Seprod, we have felt no significant impact on the financial results so far although we hope to have the Export Division of Seprod begin marketing their two brands which would be made by us.” 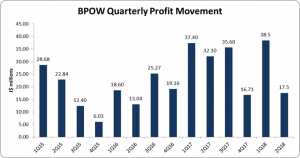