Administrative Expenses for the quarter saw an increase of 23%, totaling $58.30 million relative to last year’s $47.41 million.

BPOW reported nil for Other Income for the first quarter relative to $1.14 million recorded for the corresponding period in 2017.

Finance Cost of $1.63 million was recorded for the first quarter compared to $1.15 million in the year prior, while Finance Income totalled $24.64 million relative to the $3.11 million for the same quarter in 2017. Consequently, Profit before taxation reflected a 56% jump year over year to $68.47 million versus $43.78 million booked for the prior year’s corresponding quarter.

After taxation of $8.27 million (2017: $5.30 million), Net Profit for the first quarter amounted to $60.20 million compared to $38.48 million, a 56% improvement. Management noted, “In the period under review profits have been bolstered by significant benefits due to changes in the exchange rate.”

BPOW further advised, “Our efforts to improve our export performance continue to show results. Over 32% of our soap sales went to export markets in the Caribbean, the USA and the UK. Most significant improvement has come from the Caribbean market where we now have many distributors selling our products. The increase in export sales over the same quarter in the previous year was 82%, from $25 million to $45 million.” 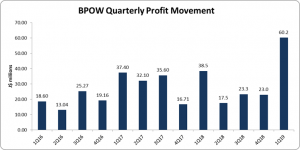