Jamaica Broilers Group (JBG) reported total revenues of $12.16 billion, a 6% increase on the $11.49 billion reported in 2017. Total revenue was broken down as follows. Of total revenues:

Other income climbed 179% from $68.94 million for the first quarter of 2017 to $192.56 million in 2017. Distribution costs declined 2% to close at $436.09 million relative to $443.78 million recorded for the prior year’s comparable period, while administration and other expenses grew by 22% to $2.27 billion (2017: $1.86 billion). According to the company, “distribution costs and administrative costs, reflect an increase of 17% over the previous year primarily due to salary increases and exchange movements”

Net profit attributable to shareholders amounted to $398.84 million relative to $197.69 million booking for the comparable period in 2017.

Total comprehensive income for the first quarter amounted to $712.74 million relative to $228.60 million. 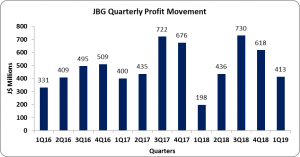