CAC 2000 Limited (CAC) revenues for the first quarter ended January 31, 2020 increased 84% to $306.57 million relative to $166.43 million for the comparable period in 2019. CAC explained that, “the increased revenues and profits for this quarter demonstrates our recovery from the challenges arising from the road construction works in the prior year.”

The Company reported a 5% reduction in Total Expenses to $105.78 million (2019: $111.79 million). This was as a result of an 8% decrease in general administration to $98.77 million (2019: $106.98 million). CAC stated this was due to, “the majority of the savings came from salaries, IT, Depreciation, bad debt provision, bad debt recovery and professional fees.” Also, selling & distribution expenses increased by 46% to $7.01 million for the first quarter, relative prior year’s corresponding quarter of $4.81 million.

Other Income of $5,000 was recorded for the period a drastic reduction from $27.22 million reported for the same period the prior year. The Company noted that, “Last year we had a large “other Income” number due to the Barbuda project, so in actuality, the profit turnaround of our Jamaica core Business is even higher the $39 million net profit improvement.” Consequently, Profit before Taxation and Finance Cost amounted to  $9.03 million compared to a loss of $30.01 million experience in the first quarter of 2019.

The company highlighted that, “We are carefully following the Covid-19 and pandemic to identify solutions and products ( some of which we already offer) that can mitigate the risks of transmission of this virus for our customers and ourselves. Our risk mitigation strategy is also being refined as we anticipate that flexi-time work schedules, social responsibility and compassion will be required during the course of the outbreak.” 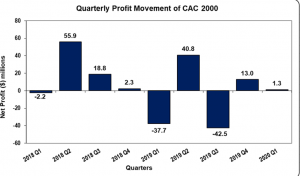