Earnings per share (EPS) for the first quarter amounted to $0.05 compared to $0.03 for the corresponding quarter for the prior year. The trailing twelve month earnings per share amounted to $0.12. The number of shares used in our calculations is 945,690,252 units. Notably, LAB’s stock price closed the trading period on March 16, 2020 at a price of $2.03. 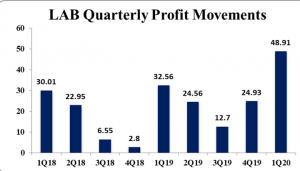