Other Income of $7.33 million was recorded for the period up from $2.12 million reported for the same period the prior year. The Company noted that, “this was due to due a gain from motor vehicle disposal.” Consequently, Profit before Taxation and Finance Cost rose by 24% to $75.74 million (2017: $61.16 million).

The company highlighted that, “the CAC 2000 Foundation received a grant from the Jamaica Social Investment Fund Integrated Community Development Project for the Alternative Likelihood Skills Development to provide skills training to 100 persons by March 2019. This training started in July and the intention is to not only provide training but to seek to provide gainful employment for the trainees in the air-conditioning industry.” 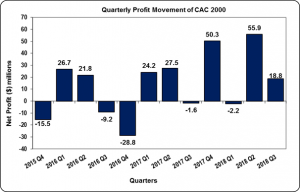