CAC 2000 Limited revenues for the first quarter decreased by 21% to $239.51 million compared to $301.88 million recorded for the same period for the prior financial year. Management noted, “the portfolio of open jobs on hand and quotation activity was down (colder weather and persistent rain diminishing the demand for personal air conditioning). Management however noted, “the good news is that we expect to recover most (if not all) of this revenue shortfall in the second quarter as we won over $450M of new projects in this quarter (vs $72M in the same period last year) and our leads and quotations for residential units are also much more active.”

Consequently, Net loss for the quarter was reported at $2.23 million versus a net profit of  $24.16reported as at January 2017. Notably, the Company is on the Junior Stock Exchange, and as such is currently exempted from paying taxes. 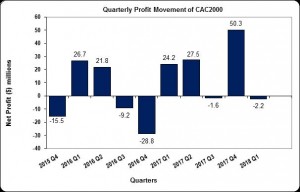