Other income of $40,000 was recorded for the period under review, down from $1.86 million reported for the same period in the prior year.

Management noted, “In the first 6 months of our financial year, we have successfully launched air purifiers for homes, offices and cars and look forward to bringing to the market additional products and services to address health and well-being aimed at improving the Internal Air Quality (IAQ) of our customers, which is just one segment of Indoor Environmental Quality (IEQ), along with the development of strategic partnership with experts in complimentary areas.”

Furthermore, CAC noted that “The company was pleased to launch enRvate Limited our joint energy venture with Tropical Battery, which officially opened for business on June 1, 2021, as reported on the Junior Market of the Jamaica Stock Exchange. This venture is in keeping with our strategic priority of diversification and we look forward to what we know will be a wonderful opportunity for all involved.” 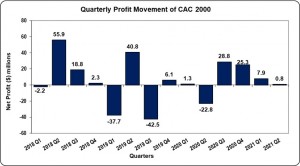