Carreras Limited reported Operating Revenue of $6.06 billion, 5% less than the $6.37 billion booked in 2016. Revenue for the quarter increased by 7% compared to the corresponding Quarter in 2016 moving from $3.03 billion in 2016 to $3.25 billion in 2017. Although second quarter performances increased, according to the company “there was a lower trade demand for cigarettes for both the first and second quarter of the 2017/2018 financial year. We reiterate the point that there is a direct relationship between high taxes and its adverse impact on legal volumes, Governments revenues and the rise of the illicit trade.”

Administrative, distribution and marketing expenses increased 2% to total $989.68 million (2016: $970.07 million). The company stated that this was attributable to “one-off expenses associated with the recent stock split and the modernisation of the Articles of Incorporation. Overheads continue to be rigorously monitored and controlled by management.

Net Profit for the six months declined 1% to $1.67 billion relative to $1.69 billion booked in 2016. Net Profit for the second quarter saw a 11% increase amounting to $914.39 million compared to the $826.12 million reported in the second quarter 2016 period. Total Comprehensive Income attributable to shareholders for the period closed at $914.01 million compared to $825.61 million reported for the corresponding quarter in 2016. 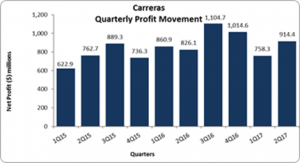