Caribbean Cement Company Limited (CCC) for the for the year ended December 31, 2018 reported total revenue for the year ended December 31, 2018 of $17.57 billion, a 6% or $1.06 billion increase when compared with the $16.51 billion reported in 2017. Total revenue for the quarter amounted to $4.33 billion reflecting an increase of 2% over the $4.25 billion achieved in the corresponding quarter.

Total comprehensive income attributable to shareholders for the period amounted to $2.41 billion compared to $1.10 billion for the corresponding period in 2017. 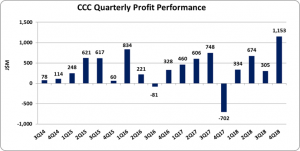 Analyst Certification – This document is for information purposes and should not be construed as a recommendation. Each research analyst (s) also certify that no part of their compensation was, is, or will be, directly or indirectly, related to the specific recommendation (s) or view (s) expressed by that research analyst in this research report.