Cost of sales amounted to $301.84 million relative to $245.29 million in the prior corresponding period. Consequently, gross profit fell to $158.20 million for the period under review, compared to the prior year’s figure of $167.75 million.

Consequently, profit from operations for the period closed at $56.43 million versus $70.33 million booked for the twelve months to December 2017.

As a result, after incurring taxation of $2.20 million (2017: nil), net profit for the period amounted to $73.41 million, representing an 11% decline from the comparable period’s figure of $82.50 million. Management noted, “A deliberate strategy to maintain sufficient inventory levels in order to better satisfy our customer’s requirements has allowed the Company to grow its revenues and profits. The securing of new markets for fragrances and increasing the volume of sales of flavours to existing customers and new customers in foreign markets has also contributed significantly in this regard.”

CFF also stated, “Based on the outlook for the coming year, it is expected that the company will continue to improve its profits whilst increasing its market share in both the domestic and overseas markets.” 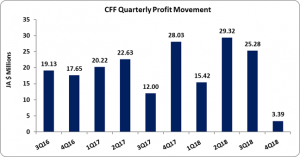