BPOW for the nine months ended January 31, 2019 revenues increased by 11% to $1.27 billion relative to $1.15 million recorded in 2018. For the third quarter, revenue increased 5% from $388.30 million in 2018 to $408.62 million. The company indicated, “Overall sales for the three-month period are up by 5% from $388 million to $409 million with the Lumber Depot Division showing an increase of 13% while the Blue Power Division declined by 11%. For the nine-month period, however, Lumber Depot Division sales increased by 10% while the Blue Power Division sales grew by 12%. In the period under review profits have been bolstered by significant benefits due to changes in the exchange rate.”

The Company also noted, “Our efforts to improve our export performance continue to show results. Export sales showed an increase of 42% on a year-to-date basis, rising from $74 million in the previous year to $103 million in the current year.” On the other hand, Management noted, “The laundry soap business continues to face heightened competition from local and international manufacturers. We will continue to monitor the situation to protect the gains we have made.” 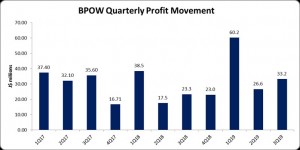