For the period ended June 30, 2021, Caribbean Flavours & Fragrances Limited’s (CFF) revenue decreased by 3% to $301.30 million relative to $310.59 million for the comparable period in 2020. For the quarter, the Company generated revenue of $167.56 million (2020: $161.20 million), a 4% increase year over year. CFF noted that, “this was largely due to an increased activity in the fragrance business following a noticeable improvement by our local manufacturing clients as the Jamaican economy began to reopen during the period.” 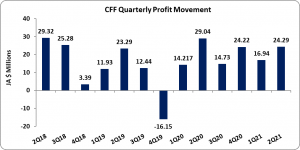