GWEST Corporation Limited, for the three months ended June 30, 2021, booked total revenue amounting to $30.80 million, an increase of 25% when compared with the $24.16 million booked last year. Management noted, “revenue was positively impacted by a 46% increase in patient fees during the quarter relative to the corresponding quarter in the prior year. The increase in patient fees was mainly due to the relaxing of Covid-19 related curfew restrictions resulting in a greater movement of the people and longer opening hours at our facilities.”

Additionally, “Lease income increased by 12% over the corresponding quarter in the prior year as result of increase rental of lettable space. Negotiations are ongoing with a prospective tenant for a lease of 5,000 sq.ft. of office space. We expect to complete these negotiations during the second quarter.”

As a result operating loss closed the period at $1.29 million versus a loss of $7.94 million booked twelve months earlier. 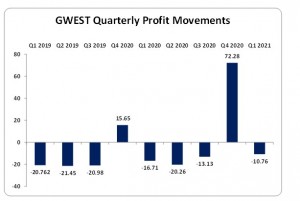