The company reported net loss of $5.24 million, this compares with the loss of $7.47 million for the same period last year. 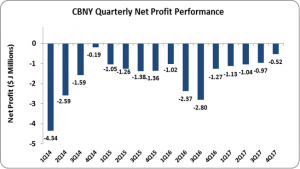