Caribbean Cream Limited (KREMI) for year ended May 31, 2017, reported a 1% increase during the quarter totaling $319.10 million compared to $315.26 million in the corresponding period last year. According to the company, “sales were affected by the reduction in demand due to adverse weather conditions (rain & flooding) existing in the 1st Quarter of our financial year.”

Costs of Sales amounted to $211.74 million, an increase of 19%. Management indicated, “the increased cost is driven by (1) price increases on ingredients, storage and shipping, (2) higher utility costs due to the use of additional space to accommodate more raw material goods storage, and (3) increased labour cost due to salary increases and preparations for anticipated sales.”  Nevertheless, Gross Profit fell 22% or $30.42 million to $107.36 million compared to $137.78 million for the corresponding period in 2016.

Administrative Expenses increased by 11% to close at $60.50 million, while Selling and Distribution Costs slid 1%  from $10.84 million to $10.76 million. Finance Cost rose 5% year over year to amount to $3.15 million relative to $3 million recorded in the first quarter of 2016. The growth in Administrative costs were driven by increases in staff training as per the company.

No taxes were charged for the quarter, as such Net Profit Attributable to Shareholders decreased by 51% from $71.18 million in 2016 to $34.86 million. Consequently, Earnings per Share for the quarter amounted to $0.09 relative to $0.19 for the prior year’s corresponding period. The trailing twelve months earnings per share amounted to $0.36. the number of shares used in this calculations were 378,568,115 units. 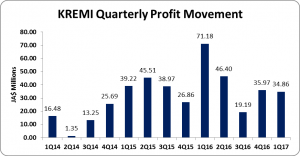