The consumer price index for the month of April 2019 recorded an inflation rate of 0.1%, following a 0.8% increase in its index for March 2019, according to The Statistical Institute of Jamaica (STATIN). The Consumer Price Index for the month of March rose to 256.8, relative to the 256.5 reported for March 2019. This movement was largely attributed to the upward movements in the divisions, ‘Food and Non-Alcoholic Beverages’ by 0.5% and ‘Transport’ by 0.4%. This movement was however tempered by the 1.5% decline in the index for ‘Housing, Water, Electricity, Gas and Other Fuels’. Inflation within the Greater Kingston Metropolitan Area and Rural Areas increased by 0.2% and 0.1% respectively while Other Urban Centres fell by 0.1%.

The index for the ‘Food and Non-Alcoholic Beverages’ division recorded a 0.5% increase in its index for April 2019, following a 0.9% increase for March 2019. This resulted from the upward movements within the groups ‘Food’ and ‘Non-Alcoholic Beverages’ by 0.5% and 0.3% respectively. Within the ‘Food’ group, the class ‘Vegetables and Starch Foods’ increased 1.1% as a result of “higher prices for vegetables such as carrot, cabbage and sweet pepper but however moderated by a fall in price for some starchy tubers such as yams and potatoes”. In addition, the classes ‘Fruit’ and ‘Oils and Fats’ and ‘Food Products n.e.c.’ each also increased by 0.3%. The ‘Non-Alcoholic Beverages’ group registered a 0.3% growth in its index, as the groups ‘Coffee, Tea and Cocoa’ and ‘Mineral Water, Soft drinks, Fruits and Vegetable Juices’ both recorded increases of 0.3%.

The index for the ‘Housing, Water, Electricity, Gas and Other Fuels’ division recorded a 1.5% decline in its index for March, following a 1.5% upward movement for March 2019. This was a result of the two groups ‘Electricity, Gas and Other Fuels’ and ‘Water Supply and Miscellaneous Services Related to the Dwelling’ registering declines of 2.4% and 1.6% in its index respectively due to “lower rates for electricity, water and sewage”. This downward movement was however tempered by the 0.3% increase in the group ‘Maintenance and Repair of Dwellings’

The divisions ‘Miscellaneous Goods and Services’, ‘Clothing and Footwear’ and ‘Health’ all recorded increases of 0.2% their respective index for April 2019. The increase within the division ‘Miscellaneous Goods and Services’ was attributable to “increased prices for some personal care products” while the increase in the division ‘Clothing and Footwear’ was as a result of the group ‘Clothing’ recording an increase of 0.3%. The 0.2% upward movement in the division ‘Health’ was influenced by the upward movements in the groups ‘Medical Products, Appliances and Equipment’ (0.3%) and ‘Health Services’ (0.1%).

Lastly, the divisions ‘Alchoholic Beverages’ recorded an increase of 0.3% in its index for April 2019. “The classes ‘Spirits’ and ‘Wines’ were the main contributors to this movement”

Notably, the other divisions ‘Recreation and Culture’ and ‘Education’ had no effect on the index for April 2019.

The movement in the index for the fiscal year-to-date was 0.1 per cent and the point-to-point movement was 3.9 per cent. Individual divisions saw the following changes: 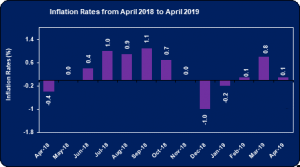