KEY booked a gain in ‘change in unearned premium reserve’ of $26.67 million relative to a loss of $9.30 million last year. As such, net premiums earned increased by 19% totalling $299.04 million versus $252.30 million for the comparable quarter in 2018. Changes in insurance reserves for the period amounted to $1.78 million.

Claims expense posted a marginal increase to $279.06 million from the $278.40 million recorded for the first three month of 2018. Management stated, “The company’s claims expense has remained at the same level as that at 31 March 2018 reversing the previous periods increasing trend. Notwithstanding, we remain committed to maintaining efficiency in the handling of claims by ensuring prudent reserving and settlement practices.”

A gain of $47.77 million (2018: $74.13 million) was recorded for reinsurance recoveries, while administration and other expenses inched up 9% to close at $98.12 million compared to $89.83 million recorded in 2018. According to management, “There was an overall increase of $7.7 million in operating costs for the period, due to non-recurring professional fees in the 1st quarter of 2019 in comparison to that obtained in the 1st quarter of 2018. Cost containment remains a key strategic focus for the company.”

Total comprehensive loss for the quarter amounted to $37.32 million, in contrast to a loss of $42.34 million. 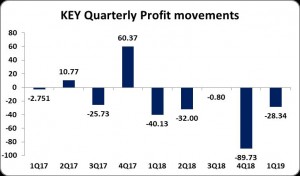