The index for the ‘Housing, Water, Electricity, Gas and Other Fuels’ division recorded a 1.3% decline in its index for November 2018, following a 0.8% downward movement for November  2018. This was a result of the group ‘Electricity, Gas and Other Fuels’ registering a decline of 2.0% in its index. According to STATIN, this movement was “due to lower electricity rates.” The group ‘Water Supply and Miscellaneous Services Related to the Dwelling’ also declined by 1.6% due to decreased water and sewage rates.

The index for the division ‘Transport’ recorded a decrease of 1.5% in its index for the month of December 2018. According to STATIN, this was attributable to “the fall in the price of petrol and the cost for air travel”.

The divisions ‘Furnishings, Household Equipment & Routine Household Maintenance’ and ‘Health’ both recorded increases of 0.1% for December 2018. The increase within the division ‘Furnishings, Household Equipment & Routine Household Maintenance’ was attributable to increased prices for some household cleaning products while the main contributor for the increase in the division ‘Health’ was the increase in the group ‘Medical Products, Appliances and Equipment’ due primarily to increased prices for some pharmaceutical products.

The divisions ‘Restaurants and Accommodation Services’ and ‘Recreation and Culture’ both recorded increases of 0.1% in its index for the month of December 2018. The increase in the division ‘Restaurants and Accommodation Services’ was mainly as a result of higher prices for meals consumes away from home while the increase in the division ‘Recreation and Culture’ was attributable to increased prices of equipment for sport, camping and open-air recreation.

The divisions ‘Alcoholic Beverages’ and ‘Miscellaneous Goods and Services’ each recorded increases of 0.2%.The former was attributed to the upward movement in prices for ‘Wines’ and ‘Spirits’ while the upward movement in the index ‘Miscellaneous Goods and Services’ was influenced by the rise in the cost for some personal care items

Notably, the other divisions ‘Clothing and Footwear, ‘Communication’ and ‘Education’ had no effect on the index for December 2018.

The movement in the index for the fiscal year-to-date was 2.7 per cent and the point-to-point movement was 2.4 per cent. Individual divisions saw the following changes: 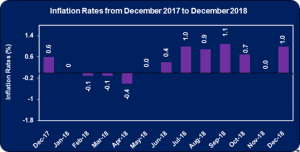