The index for the ‘Food and Non-Alcoholic Beverages’ division recorded a 0.5% decrease in its index for January 2019, following a 1.5% downward movement for December 2018. This resulted from the downward movements within the ‘Food’ group but however tempered by the 0.5% increase in the group ‘Non-Alcoholic Beverages’. Within the ‘Food’ group, the class ‘Vegetables and Starchy Foods’ declined 2.5%. STATIN noted, “a surplus of some agricultural products such as cabbage, lettuce, carrots and yam on local market led to the decline in the class for January.” Within the ‘Non-Alcoholic Beverages’ group the classes ‘Mineral Waters, Soft Drinks, Fruit and Vegetable Juices’ and ‘Coffee, Tea, and Cocoa’ recorded increases of 0.4% and 0.7% respectively.

The index for the ‘Housing, Water, Electricity, Gas and Other Fuels’ division recorded a 0.1% decline in its index for January 2019, following a 1.3% downward movement for December 2018. This was a result of the two groups ‘Electricity, Gas and Other Fuels’ and ‘Water Supply and Miscellaneous Services Related to the Dwelling’ registering declines of 0.1% and 0.3% in its index respectively. According to STATIN, this movement was as a result of “the fall in the rates for electricity, water and sewage”

The index for the division ‘Transport’ recorded a decrease of 0.6% in its index for the month of January 2019. According to STATIN, “This movement was mainly attributable to reduced petrol prices.”

The divisions ‘Education and ‘Miscellaneous Goods and Services’ recorded increases of 1.5% and 0.3% respectively. The former was influenced mainly by “the rise in tuition fees for preparatory schools for the new term” while the upward movement in the index ‘Miscellaneous Goods and Services’ was influenced by “increased prices for some personal care products and services”.

Notably, the other divisions ‘Alcoholic Beverages and Tobacco’, and ‘Communication’ had no effect on the index for January 2019.

The movement in the index for the fiscal year-to-date was 2.5 per cent and the point-to-point movement was 2.3 per cent. Individual divisions saw the following changes: 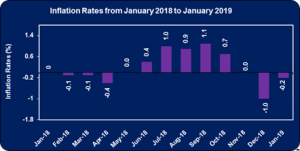