The ‘Food and Non-Alcoholic Beverages’ division reported a 1.2% increase for July, relative to 1.1% movement in June 2017, this is the highest monthly movement in the division for the calendar year. The group ‘Food’ rose 1.3%, while ‘Non-Alcoholic Beverages and Tobacco’ increased by 0.1%. The increase in the price of ‘Food’ was driven by a 3.8% increase in the class ‘Vegetables and Starchy Foods, in addition ‘Meat’, ‘Fish and Seafood ‘and ‘Fruit’ were up 0.6%, 0.4% and 1.4% respectively.

For the month of July the division ‘Housing, Water, Electricity, Gas and Other Fuels’ posted a 0.3% decline. The ‘Electricity, Gas and Other Fuels’ was the main driver behind the decline, this as the group recorded a 0.8% decline. In contrast the groups ‘Water Supply and Miscellaneous Services Related to the Dwelling’ and Maintenance and Repair of Dwelling’ both increased by 0.6% and 0.2% respectively. The ‘Furnishings, Household Equipment and Routine Household Maintenance’ division grew by 0.1%; driven by the class ‘Furniture and Furnishings.’ 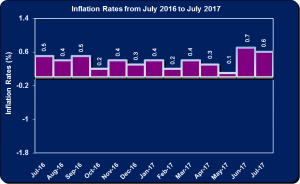