The inflation rate for the month June 2017 was 0.7 %, following an upward movement of 0.1% in May 2017. The movement was credited to a 1.1% increase in the division ‘Food, Non-Alcoholic Beverages’ which was impacted by flood rains in May. The division ‘Transport’ moved up by 0.4%, while the ‘Housing, Water, Electricity, Gas and Other Fuels’ increased by 0.4%. The ‘Recreation and Culture’ and ‘Restaurants and Accommodations Services’ recorded their largest movements for the year with a 0.4% and 0.6% increase year to date. The calendar year-to-date inflation rate was 2.1%, the point-to-point 4.4% and the fiscal year-to-date 1.1%.

The ‘Alcoholic Beverages and Tobacco’ division recorded an increase of 0.1%. This was significant lower than the 1.6% movement that was recorded from May 2017. On the other hand the index for ‘Clothing and Footwear’ went up by 0.2% for June this was due to an increase in the prices of footwear.

For the month of June the division ‘Housing, Water, Electricity, Gas and Other Fuels’ posted a 0.4% increase. The ‘Electricity, Gas and Other Fuels’ group was the main contributor to the increase, recording a 1.1% increase. However the growth in the index was tempered by the group ‘Water Supply and Miscellaneous Services Related to the Dwelling’ which registered a 1.3% decline. The ‘Furnishings, Household Equipment and Routine Household Maintenance’ division saw an increase of 0.1%; driven by the class ‘Household Textile.’ 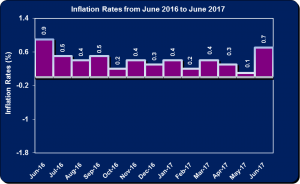