Caribbean Producers Jamaica Limited (CPJ) for the six months ended December 31, 2018,Revenues declined marginally by 0.3% from $53.91 million, to close the period at $53.73 million compared to the prior year. For the second quarter, the company also posted a 0.4% decline in revenues to close at $29.42 million relative to $29.54 million for the same quarter of 2017.  CPJ noted that, “The Group retuned to normalcy of operations with strong revenue in Q2 and a return to profit. The increase in revenue for the quarter by US $5.1 M (21%) above Q1 and on par with Q2 of the prior year at US$29.5 M. The Company delivered a strong profit recovery of US$484K in the month of December 2018.” Management also noted, “Revenue from protein sales to hotels decreased due to inequitable competition based on their mistreatment of applicable duties and taxes. This represented a decline in the category for the period of US$1.3M or 19.4% when compared to same period prior year. However, given CPJ’s diverse product portfolio, aggressive sales push in order categories resulted in strong growth for seafood (28.6%), spirits (21.1%) and RTD Beverages (13%) to offset the decline. 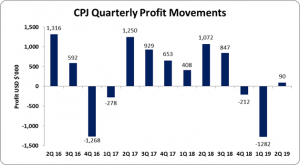