Caribbean Producers Jamaica Limited (CPJ), for the first three months ended September 30, 2020 reported that revenues decreased by 65%, to close the period at $9.35 million compared to the $27.08 million for the same period last year.

Other operating income totalled $31,401 compared with the $50,420 booked the previous year.

CPJ further noted, “The easing of the travel restrictions and a willingness to travel has seen increased tourism activity both onshore and offshore. This has increased the demand for CPJ’s products and services in the first few months of the fiscal year 2021. The Group is prepared for a full recovery’ of the travel industry. It remains committed to its strategic goal of achieving long-term shareholder value by creating scale and implementing strategic business transformation initiatives.”

As at September 30, 2020, total assets amounted to $56.38 million, 11% less than its value of $63.48 million booked a year ago. According to the Company, “The Group continues to demonstrate strong treasury management during these difficult times with a current asset to current liability ratio of 2.62:1 compared to 2.20:1 in the same period last year.” 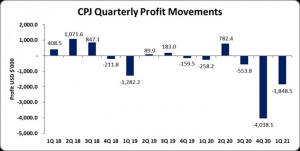