According to the Statistical Institute of Jamaica (STATIN) the consumer price index for October 2020 was 106.9 resulting in an inflation rate of 0.8%, a 0.6% increase when compared to the previous month’s 106.1 price index. Notably, STATIN indicated that the main contributor to this increase was a 1% rise in the index for the heavily weighted division ‘Food and Non-Alcoholic Beverages’. This was attributed to higher prices for items such as tomato, sweet pepper and lettuce resulted in the index for the class ‘Vegetables, tubers, plantains, cooking bananas and pulses’ moved up by 2.2%. Another major contributor to the upward movement was the index for the ‘Restaurants and Accommodation Services’ division which advanced by 3.1% due to increased prices for some meals consumed away from home. The ‘Housing, Water, Electricity, Gas and Other Fuels’ division also impacted the movement in the inflation rate with the index increasing by 0.7%. This was attributed to higher rates for electricity, water and sewage which led to the index for the groups ‘Electricity, Gas and Other Fuels’ and ‘Water Supply and Miscellaneous Services Related to the Dwelling’ increasing by 1.9% and 0.9% respectively. The overall movement in the inflation rate was tempered by a 0.1% decline in the index for the ‘Transport’ division, influenced by lower petrol prices

The heaviest weighted division of ‘Food and Non-Alcoholic Beverages’ recorded a 1% increase for October 2020. The ‘Food’ group index also recorded growth of 1%, while the ‘Non-Alcoholic Beverages’ group went up by 0.4%. The higher prices for agricultural produce such as tomato, sweet pepper and lettuce resulted in the 2.2% increase in the ‘Vegetables, tubers, plantains, cooking bananas and pulses’ class. On the other hand, lower prices for yam, pumpkin and onion tempered the movement for this class. STATIN noted that other classes with notable increases were ‘Meat and other parts of slaughtered land animals’ 0.8 per cent, ‘Cereals and cereal products’ 0.4 per cent, ‘Fish and Seafood’ 0.5 per cent and ‘Fruits and nuts’ 1.8 per cent. The Greater Kingston Metropolitan Area and Rural Areas each recorded an inflation rate of 0.8%, while Other Urban Centres reported inflation of 0.7% for the October 2020 period.

The index for the ‘Housing, Water, Electricity, Gas and Other Fuels’ division recorded a 0.7% increase for October 2020. This was as a result of a 1.9% rise in the index for the group ‘Electricity, Gas and Other Fuels,’ due to increased electricity rates.  The increase was also supported by a 0.9% increase in the group ‘Water Supply and Miscellaneous Services Related to the Dwelling ‘ which resulted from higher water and sewage rates.

Inflation of 0.4% was recorded for the division  ‘Furnishings, Household Equipment and Routine Household Maintenance’. This was mainly due to the 0.5% rise in the index for the group ‘Goods and Services for Routine Household Maintenance.’ STATIN noted that, “increases were recorded for other groups within this division namely ‘Household Textiles’ up by 0.4%, ‘Household Appliances’ by 0.3% and ‘Furniture, Furnishing and Loose Carpets’ which increased by 0.2%.

The division for ‘Health’ recorded an increase of 0.2% in its index for October 2020. The main contributing factor to this upward movement was a 0.2% increase in the index for each of the two groups ‘Medicines and Health Products’ and ‘Outpatient Care Services’. The increase in ‘Medicines and Health Products’ was as due to higher prices for some over-the-counter drugs, prescription drugs and medical products, while, increases for the latter group were recorded for some ‘Preventative care services’ and ‘Outpatient dental services.

For two consecutive months the index ‘Transport’ declined by 0.1%. According to STATIN this was largely due to, “lower petrol prices.” In addition, the ‘Information and Communication’ group recorded a negligible decrease.

The ‘Recreation, Sport and Culture’ division registered a 0.5% rise for October 2020. The factor which contributed to this movement was the 0.6% increase in the group ‘Newspapers, Books and Stationery’. The upward trend was due to higher prices for books, stationery and drawing materials.

STATIN highlighted a significant increase in the division ‘Restaurants and Accommodation Services’ which increased by 3.1%, primarily due to higher prices for food consumption away from home.

Lastly, the division for ‘Personal Care, Social Protection and Miscellaneous Goods and Services’ produced an increase of 0.5% for October 2020, which was a result of price increase for some personal care products and services such as toothpaste, toilet paper and haircuts for males.

The movement in the index for calendar year to date inflation was 4.4%, fiscal year-to-date was 3.1% and the point- to-point was 5.0% as at October 2020. Individual divisions saw the following changes: 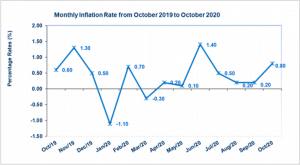