CPJ reports US$258,201 Net Loss Attributable to Shareholders for the First Quarter

Caribbean Producers Jamaica Limited (CPJ), for the first three months ended September 30, 2019 reported that revenues increased by 11%, to close the period at $27.08 million compared to the $24.31 million for the same period last year. According to the Company “the first quarter is traditionally considered a soft quarter based on tourist arrivals. The group increased market share with new hotel contracts and exceeded projections for the period.” Moreover, Management further stated that, “the robust growth in sales revenue and return to operating profitability in Q1 shows momentum for the tourist season ahead. This growth not only represents the continuous aggressive sales strategy but also a deepening of the relevance of CPJ offerings in the Jamaican market.”

Other operating income totalled $50,420 compared with the loss of $4,266 booked the previous year.

No taxes were charged for the period under review versus tax charges of $36,591 last year which translated into a net loss for the period amounted to $317,396 million relative to a loss of $1.26 million in 2018.

CPJ further noted, “Management believes that the group will continue to build on the momentum it has achieved thus far and continue with the drive and tenacity throughout the remaining quarters of the current fiscal 2020. The objective in this quarter and beyond is to continue working towards value creating initiatives that will not only increase our revenues and gross margins, but also further contain fulfilments costs. The Management remains committed to a strategy on the ability long term shareholder value by creating scale and implementing strategic business transformation initiatives. The desired outcome is to strengthen its platform for growth to accommodate the announced plans for new hotel investments and room expansion.” 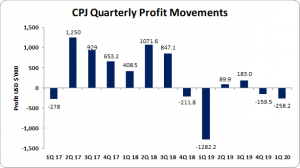