Caribbean Producers Jamaica Limited (CPJ) for the six months ended December 31, 2019, revenues increased by 11% from $53.73 million in 2018 to close the period under review at $59.47 million. For the second quarter, the company also posted a 10% increase in revenues to close at $32.38 million relative to $29.42 million for the same quarter of 2018.  CPJ noted that, “the growth in revenues was observed both in onshore and offshore operations. This incidentally is the best performing half tear for the group thus far.”

CPJ stated, “The group has adopted IFRS 16 Leases effective July 1, 2019 which has resulted in the introduction of a single, on-balance sheet accounting model for lessees.” Additionally, the Company noted, “The robust growth in the sales revenue and profitability for the half year, augurs well for the group as we continue to make progress in improving our operational efficiencies which should contribute to operating profits for the current fiscal year.” 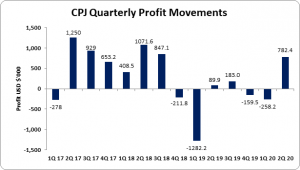