CPJ’s also stated, “It has been a year and a half since COVID-19 began its unprecedented impact on the global economy. COVID-19 continues to disrupt and dictate global economic activities, especially the travel sector and global supply chain industry. Management expects that challenges will continue in supply chain for the short to medium term. Based on improvements in the dissemination of vaccine in Europe, the US and Canada, our main travel partners, Management is confident that thus points to a strong rebound in tourism.”

CPJ further noted, “The upward trend has continued into the new fiscal year with unaudited July Group revenues of US$9.4M and CPJ Jamaica revenues of US$7.6M. The Company  is projecting that this upswing is the result of a pivotal turn in tourism and will be a continuing trend. The Company is closely monitoring and assessing the impact of the new Delta variant of the virus. The Management of CPJ is cautiously optimistic that changes in restrictions will not lead to any further travel bans or closures of hotels, nor in any way impact or slow the recovery of the sector.”

Furthermore, Management of CPJ has “implemented and embraced strategies to mitigate against the risk of COVID-19. One such example is the development of new sales strategies to improve market share in the retail channel, including expanded product lines. A new and improved online store and expansion of the CPJ Market in Montego Bay. Construction of the 6000 sq. foot store started in July and is estimated to open early next year,” CPJ noted.

The Company also highlighted that “Management is committed to continue its pursirt of cost saving initiatives and operational efficiencies through improvements in IT systems relating to supply chain processes, distribution and warehouse management. As part of that commitment and despite the pandemic, the CPK Group invested more than US$1.8M in capital expenditure during FY ending June 2021. Processes and initiatives implemented during the course of the last eighteen months have resulted in a material reduction in costs of operation at CPJ.” 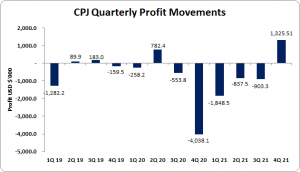