DCOVE Limited, for the twelve months ended December 31, 2017, reported total Revenue of US$16.63 million, a 9% increase when compared to US$15.26 million booked the year prior.

Revenue from Dolphin Attraction contributed US$9.14 million to Total Revenue; this represents a 4% increase when compared to the US$8.81 million reported in 2016.  Revenues from the Ancillary Services totalled US$7.50 million, up by 16% from last year’s US$6.50 million. 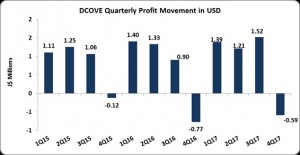