Dolphin Cove Limited (DCOVE), For the nine months ended September 30, 2018 reported total revenue of US$11.62 million, an 11% decrease when compared to US$13.03 million booked the year prior. total revenue for the quarter amounted to US$3.89 million (2017: US$4.37 million). According to the company “Despite the fact that one of the major cruise lines with which we deal, Royal Caribbean, drastically reduced calls to Jamaica this year and despite the adverse effect of the state of emergency on the attractions business, we were able to hold the decline in revenue to just 12% year to date. We believe that we will see a recovery of calls to Jamaica by cruise ships with our customer demographic, but we are also working on new sales and marketing strategies to restore the revenue loss.”

Revenue from Dolphin Attraction contributed US$6.38 million to total revenue; this represents a 13% decline when compared to the US$7.35 million reported in the prior year. Revenues from the Ancillary Services totalled US$5.24 million, an 8% drop from last year’s US$5.68 million.

DCOVE highlighted that, “Our Half Moon Hotel operation was closed due to the renovation of the hotel but the opening of the facility at Puerto Seco in the near future is expected to more than compensate for the loss of revenue from Half Moon. We continue to improve and renovate our facilities and spent approximately US$700,000 on fixed assets during the year to date. In addition, we have included lunch in almost all of our programmes and done special promotions to better incentivize Tour Operators Management has also been successful in managing expenses, but since most of our expenses are fixed the decline in profits was greater, at 40%, than the decline in revenues.”

The company further added, “ Working Capital declined as a result of the renovation works and improvements to fixed assets and the reduction of the long-term liabilities as well as maintaining the level of dividends at a time of reduced profits.” 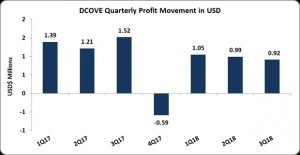