Jetcon Corporation Limited (JETCON), for the nine months September 30, 2018 reported Turnover for the nine months went up by 1% to $892.28 million (2017: $886.55 million). However, turnover for the quarter amounted to $286.81 million relative to $333.22 in 2017, a 14% decline. According to management, “Revenues fell 14 percent below the same quarter in 2017, to $287 million, and is flat for the nine months to September primarily resulting from unusually slow sales in August, historically, one of the best months for sales. The new importation regime also resulted in increased acquisition costs. We have placed more emphasis on the servicing segment and improvements to the department are beginning to reap benefits, with a 107% increase in service revenues, for the nine months to September compared to last year.”

Total expenses went up 2% to $55.34 million (2017: $54.18 million). Selling and marketing expenses saw a 11% climb to total $19.25 million (2017: $17.39 million), while administrative and other expenses moved up by $8.36 million to $35.26 million (2017: $26.90 million) . However this was offset by the 92% reduction in the company’s finance costs totalling $829,498 (2017: $9.89 million). For the first three months total expenses closed at $17.09 million, a 15% dip when compared to 2017’s $20.08 million. Jetcon highlighted, “a charge of $3.6 million for storage relating to the importation of vehicles in 2017 was not billed by the supplier until 2018 with the amount being booked in the September 2018 quarter. We also incurred additional rental charges of nearly $5 million for new space leased at the wharf which will result in lower cost and facilitate more efficient importation of vehicles going forward, these costs resulted in an increase in direct cost of sales and help to reduce the profit margin in the quarter. Margin was also affected by discounting of some vehicles that were acquired to help normalize the inventory ahead and help to prevent stockouts when pre-shipment inspection of the car market in Japan changed.”

JETCON also added, “Now that the market has adjusted to the pre-shipment inspection regime, normalcy is returning to the market and we expect shipping time and costs to decrease going forward. The future also involves generating more revenue streams, as well as making full use of the Special Economic Zone, as soon as the status is finalized. Revenues since the third quarter up to October is ahead of the similar period in 2017 by 15 percent.”

The company, as at September 30, 2018, recorded total assets of $596.68 million, an increase of 19% when compared to $501.06 million recorded last year. This rise was attributed primarily to the increase in Jetcon’s inventories which ended the period at $422.57 million, a 25% increase when compared to 2017’s $339.21 million. The company mentioned, “Inventory of motor vehicles and parts have increased over September 2017, to reach $422 million, a strategy to increase choice for customers and sales, as well as a countermeasure to the slow shipping processes earlier in the year with the implementation of the Pre-inspection regime before vehicles are shipped to Jamaica. Total receivables amount to $56 million which include amounts deposited with suppliers for goods.” 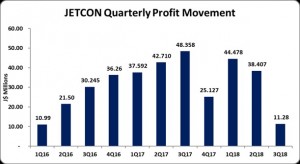