Direct Investment by Country and Industry: 2017

The U.S. Bureau of Economic Analysis indicated that, “The U.S. direct investment abroad position, or cumulative level of investment, increased $427.3 billion to $6,013.3 billion at the end of 2017 from $5,586 billion at the end of 2016.The increase mainly reflected a $243.6 billion increase in the position in Europe, primarily in Switzerland, the United Kingdom, Ireland and the Netherlands.” Notably, the manufacturing industry and holding companies accounted for the largest increases.

At the end of 2017, foreign direct investment in the United States,  showed there was an increase of $260.4 billion to $4,025.5 billion while from $3,765.1 billion at the conclusion of 2016. Thus, resulting in a $128.2 billion increase in the position from Europe, primarily Ireland, Switzerland, and the Netherlands. Affiliates in manufacturing and wholesale trade accounted for the largest increases. 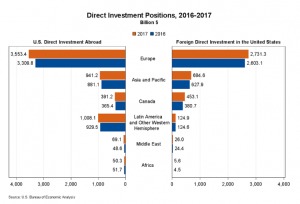 The information contained herein has been obtained from sources believed to be reliable, however its accuracy and completeness cannot be guaranteed. You are hereby notified that any disclosure, copying, distribution or taking any action in reliance on the contents of this information is strictly prohibited and may be unlawful. Mayberry may effect transactions or have positions in securities mentioned herein. In addition, employees of Mayberry may have positions and effect transactions in the securities mentioned herein