Derrimon Trading Limited (DTL) Trading Income climbed by 56%, to end the six months to total $6.29 billion compared to the $4.04 billion for the prior period. For the quarter, the company reported a 49% increase in Trading Income totalling $3.14 billion relative to $2.10 billion. The Group highlighted that, “The distribution and retail arms of the business (core) six (6) months results recorded revenue of $5.73 billion which was $1.90 billion (47.05%) more than the $4.04 billion reported for the corresponding period last year. For this second quarter ended June 2019, revenue generated from core activity was $2.85 billion representing a growth of $870.19 million (43.95%) over the $1.98 billion reported for the similar reporting period in 2018.”

“It should be noted that both the SM Jaleel portfolio and the Woodcats International Limited acquisition were added in the third quarter of the 2018 financial year,” DTL mentioned.

Cost of Sales increased by 57% to $5.19 billion for the period (2018: $3.31 billion). As a result, gross profit amounted to $1.09 billion relative to $731.57 million the prior year period, an increase of 50% year over year. Gross profit for the quarter totalled $542.07 million relative to $378.10 million reported the prior period. Management stated that, “The growth in Gross Profit continues to reflect improvements in margins arising from strategies employed within both the distribution and retail segments of the business from procurement to sales.”

Total operating expenses was $824.21 million for the period, representing a growth of 47% on the $559.73 million recorded in the prior year. Administrative expense totalled $631.17 million, 30% higher when compared to the $484.90 million in 2018. Selling and distribution expenses totalled $193.04 million (2018: $74.83 million). For the quarter, total operating expenses closed at $410.01 million (2018: $295.47 million). DTL noted that, “This increase was partly due to annual increases in salaries and wages which took effect on April 1, 2019 and costs associated with the full refinancing of short-term debt facilities.” In addition, “The major factors for this increase were utilities, distribution costs inclusive of trucking cost for the new portfolios, marketing, advertising, and staff cost,” the Group added.

Finance Cost increased by 30% to total $95.69 million for the period relative to $73.35 million in 2018. DTL mentioned that, “The realignment of our debt portfolio from short term to long term amortized facilities continues to have a positive effect on the Group by way of lower interest cost.” 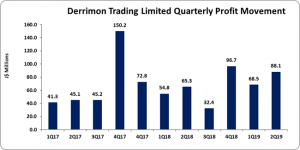