Express Catering Limited (ECL) for the three months ended August 31, 2018Revenues increased by 7% for the period to US$4.06 million (Q1 2017: US$3.81 million). The company commented that “The spending patterns for the First and Second Quarters have traditionally been lower than the rest of the year. We constantly benchmark our minimum revenue growth target to be within the rate of passenger growth”.

Total expenses increased by 5% for the period in review to US$1.94 million in Q1 2018, up from US$1.85 million in Q1 2017. This increase was associated with a 5% increase in administrative expenses to US$1.79 million from US$1.70 million in 2017. According to the company “Fixed assets expenditure for the quarter was US$77,787. This was spent mainly to continue the work on the additional Starbucks locations in the Airport. The third of the total planned 3 Starbucks location in the airport was complete just after the close of the quarter”. Depreciation and Amortization saw a 2% increase to US$140,442 compared to US$137,124 for 2017. Promotion expenses however declined 19% for the quarter from US$12,095 to US$9,746. 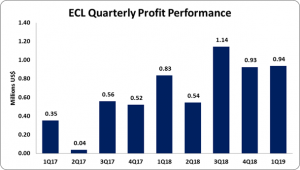