Margaritaville (Turks) Limited (MTL), for the three months ended August 31, 2019 reported Revenues which decreased by 2% for the period to US$1.82 million (2017: US$1.86 million). The company commented that “Revenue per passenger will vary marginally from one period to another, even where aggregate passenger numbers are similar, due to variations in dwell time, variations in time of day that the ship called and differing weather pattern on the ship call days.”

Cost of sales (COS) also went down by 3% to US$471,386 (2017: US$483,803) which resulted in COS margin of 26% the same as the last two years. The company stated that “none of the expenditure categories recorded unusual movements over the comparable periods. Expenditure on fixed assets during the quarter was US$98,794. Expenditure continued into the quarter on the refurbishing necessitated as a result of damage associated with Hurricanes Irma and Marie in 2017.”

MTL further noted, “We are deep into the second quarter when preparation begins in order to be ready for the busier winter season ahead. There are a number of open vacancies that will require filling to meet the winter season. We continue to make representation for a change in the policy on expatriate workers. A dividend of US$1M has also been declares and will be paid out in November 2018.

The company, as at August 31, 2018, recorded total assets of US$6.20 million, an increase of 34% when compared to US$4.62 million for the Q1 2017. MTL added, “Trade and Receivable balances were regularized to pre year end levels; a one-time Insurance Receivable was settled. Related companies balances are being given attention and will be addressed in the second quarter.” 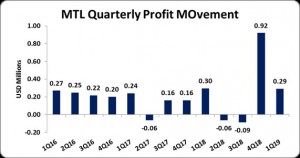