Express Catering Limited (ECL) for the six months ended November 30, 2018 reported a 4% increase in revenue to US$7.18 million (2017: US$6.88 million). Revenue for the quarter advanced 2% to close at $3.12 million relative to $3.07 million reported the previous year. According to management, “We constantly benchmark our minimum growth target to be within the rate of passenger growth of 4.78%. Revenues were negatively impacted by the upgrading works being carried out by the operators of the airport. Resurfacing of runway works caused closure of strategic departure gates during the Quarter. The east concourse, where the major Food Court is located saw a number of gates closed during the Quarter to facilitate the upgrading works. This means that flights were diverted to the west concourse that has fewer food and beverage options due to design of the airport. The long term plan is to redesign the Food Court to be central to both the east and west concourses.”

The company, as at November 30, 2018, recorded total assets of US$6.69 million (2017: US$9.20 million). Notably, property, plant and equipment as at November 30, 2018 amounted to US4.48 million 92017: US$4.41 million), while ‘Trade and other receivables’ totalled US$536,736 million (2017: US$125,190). ECL highlighted, “Fixed Asset expenditure during the quarter was $56,252. This resulted in combined half year expenditure of US$134,787, the majority of which was spent to continue the work on the additional Starbucks locations in the Airport as well as completed during the second Quarter. Increase in Trade and Other Receivables is temporary and is expected to be returned to year end levels. The balance owing by related parties was paid down by $5.77 million during the quarter. Just under US$1.0 million was paid to vendors during the 6 months; majority of this was owed for the expansion of the Starbucks locations.” 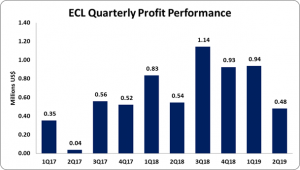