Margaritaville (Turks) Limited (MTL), for the six months ended November 30, 2018 reported that revenues increased by 58% for the period to US$3.56 million (2017: US$2.25 million). MTL noted, “This was earned from the 509 thousand passengers that visited the port spending an average US$6.99 each. The comparative revenue for the prior year ( 4 months vs 6 months was US$2.25 million from 318,722 passengers at a spend rate of US$7.07.” For the second quarter, MTL booked a 346% increase in revenue to US$1.74 million compared to US$390,044 for the comparable period in 2017. In addition the company noted, “This was earned from the 246,467 passengers that cruised into the port during the period resulting in spend-per passenger of $US$7.06. This is compared to revenue of US$390 thousand earned from the 57,939 passengers in the similar period in the prior year at a spend rate of US$6.73. It is important to note that the prior year second quarter had only one month of revenue as the port was closed for the entire September and October months after the passage of back to back hurricanes Irma and Maria during the first week of September. In addition, revenue per passenger will vary marginally from one period to another, even where aggregate passenger numbers are similar, due to variations in dwell time, variations on time of day that the ship called and the differing weather patterns on the ship call days. ”

MTL stated, “We are now deep into the third Quarter and approaching the busier part of the winter tourist season. The second half of the year is where traditionally approximately 60% of the revenue and profits are earned. We are encouraged by the trend so far. No adverse weather patterns are expected for the remainder of the fiscal year. A number of open vacancies were filled prior to the start of the winter season as some work permits that were long in the process were granted. We continue to make representation for the change in the policy on expatriate workers.

The company, as at November 30, 2018, recorded total assets of US$5.23 million versus US$4.72 million in 2017, a 11% increase. This was due to the ‘Owing by related companies’ for the period surging to US$ 757,203 when compared to US$43,954. Management indicated that, “Related companies balances were reduced substantially during the quarter compared to the balance at the close of the first quarter and are also below the balance at the year end.” However, the total asset base was tempered by the reduction in the company’s Trade and other receivables which closed the period at US$101,030 (2017: US$325,030). MTL further noted, “Marginal expenditure was made on fixed assets during the second quarter. Expenditure for the 6 months was just over US$101 thousand moving from US$98,794 at the close of the first quarter. Most of the refurbishing and repairs necessitated as a result of damage associated with Hurricanes Irma and Marie in 2017 are now completed.” 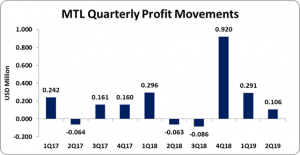