Express Catering Limited (ECL) for the six months ended November 30, 2019 reported a 9% increase in revenue to US$7.81 million (2018: US$7.18 million). Revenue for the quarter advanced 5% to close at $3.28 million relative to $3.12 million reported the previous year. According to Management, “This is quite favourable, with the airport operators reporting flat departing passenger number for the quarter when compared to the prior year. We constantly benchmark our minimum growth target to be within the rate of passenger growth.” The company added, “ Departing passenger numbers for the 6 months increased by just over 1%.”

ECL noted, “Cost of Sales had marginal changes for the Quarter and YTD and was in an acceptable range. Variations in the product mix along with changes in the product category composition will result in marginal changes. Administration and general expenses were, for the most part, in the line with prior period ratios. The increase in maintenance cost midway in the prior half year distorted the comparison and resulted in a marginal increase in current year expense ratio.”

Furthermore, Management noted that, “ the Company will be making a dividend payment on January 15, 2020.”

Other income grew by 27% to close the period at US$173 versus $136 booked in the previous corresponding period. For the quarter, ECL posted other loss of US$7,364 versus other income of US$33 recorded in the prior comparable quarter. 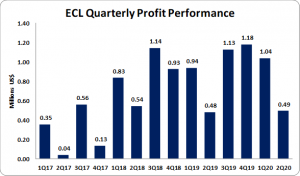 Disclaimer: Analyst Certification -The views expressed in this research report accurately reflect the personal views of Mayberry Investments Limited Research Department about those issuer (s) or securities as at the date of this report. Each research analyst (s) also certify that no part of their compensation was, is, or will be, directly or indirectly, related to the specific recommendation (s) or view (s) expressed by that research analyst in this research report.
Company Disclosure -The information contained herein has been obtained from sources believed to be reliable, however its accuracy and completeness cannot be guaranteed. You are hereby notified that any disclosure, copying, distribution or taking any action in reliance on the contents of this information is strictly prohibited and may be unlawful. Mayberry may effect transactions or have positions in securities mentioned herein. In addition, employees of Mayberry may have positions and effect transactions in the securities mentioned herein.