Taxes of 8.27 million were charged resulting in a net profit of $19.08 million compared to $28.72 million for the corresponding period in 2017. However, for the quarter a net loss of $17.53 million was booked compared to a net profit of $9.28 million in the previous year. EFRESH stated, “margins contracted because of temporary competitive pressures.” 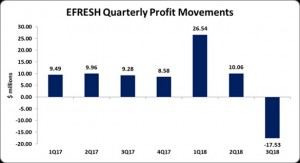