Seprod Limited (SEP) posted revenue totalling $15.50 billion compared to $12.14 billion recorded for the same period of the prior financial year, representing a 28% increase year over year. The Manufacturing Division recorded a 34% growth to close at $14.61 billion (2017: $10.94 billion),while the Distribution Division recorded a slight increase by 1% closing at $5.24 billion (2017: $5.20 billion). For the third quarter, Revenue climbed by 34% to total $5.07 billion relative to $3.77 billion reported the prior year’s corresponding quarter.

SEP noted that, “The 2018 results are bolstered by the transfer of the former Jamaican dairy operations of Nestle within the Group effective 1 January 2018. These operations, located in Bog Walk, St. Catherine, produce the Supligen and Betty products, as well as co-manufacture products for international customers. In 2017, these operations were operated by Seprod under a management services contract and were not included in the Group’s results.”

Management highlighted that, “the operation of the grains mill continues to improve steadily, as the distribution footprint widens, and consumers become more exposed to the high-quality Gold Seal brand. The other operations – dairy, biscuit, oil & margarine – had solid results, as the Group continues to reap the benefits of product innovations, increased exports, acquisitions and improved productivity from retooling.”

Furthermore, Seprod stated that, “Unfortunately, the Group suffered a J$275 million loss in the sugar operation for the period and we are now actively engaged in discussions with stakeholders as we move to eliminate these losses in the sugar manufacturing operation.” 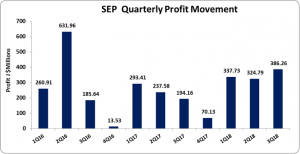