The Company reported other operating income of $183,000 for the period, 34% more than the $137,000 reported for the corresponding period last year.

The Company indicated that, “the acquisition of the assets of The Meat Experts Limited was completed in January 2019. This acquisition has increased the product offering of the Company to its existing customers as well as adding new clients.”  The division had low start-up costs for the quarter due to selling items at a discount as well as honouring existing contracts.  Nevertheless, the company was able to increase prices  to ‘desired level by the end of the quarter’ through negotiations.  EFRESH Further noted that, “the company expects to continue to grow the sales of its Meat Experts division to improve the utilization of the Factory and absorb the associated overhead costs of the plant.” 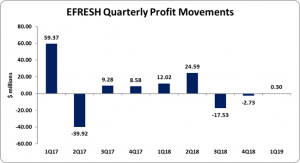