PanJam Investments Limited (PJAM) for the three months ended March 31, 2019, reported a 12% increase in total income to total $583.08 million relative to $522.88 million booked for the prior year’s corresponding period. Of total income:

Investments went up grossly by 119% to close at $94.12 million (2018: $42.93 million). It was mentioned that, “this was positively impacted by higher unrealised gains, which outweighed a foreign exchange loss and lower dividends and realised gains.”

Property income inched up 2% to $456.92 million (2018: $447.72 million). Management noted that, “the increase was due to improved rentals, though net lease income and revaluation gains declined.”

Operating expenses amounted to $401.17 million for the three months ended March 31, 2019 (2018: $371.60 million), 8% more than its total a year prior. PJAM stated that, “this increase was principally as a result of higher costs for building out rental space, insurance and staff-related items.”

Consequently, operating profits increased by 25% to a total of $190.13 million relative to $151.91 million recorded in the prior corresponding period.

Net profit attributable to shareholders for the period amounted to $891.62 million from the $827.02 million recorded in the year prior.

PJAM highlighted that, “PanJam has increased its investment in Jamaica and continues to seek additional opportunities. We also maintain our encouragement of additional measures by the government to improve efficiency of the regulatory and approval processes necessary to facilitate growth, as well as actions to reduce the high crime levels which remain a drag on the economy. The recent reductions to transfer tax and stamp duty, will stimulate development and contribute to maintaining or improving economic growth.” 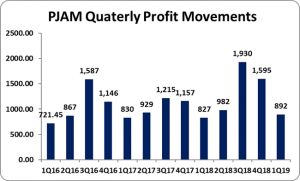